May the peace of our Lord Jesus Christ, the love of God and the communion of the Hoy Spirit be with you and your loved ones!

In a new Apostolic Letter entitled Patris corde (“With a Father’s Heart”), Pope Francis describes Saint Joseph as a beloved father, a tender and loving father, an obedient father, an accepting father; a father who is creatively courageous, a working father, a father in the shadows.

The Letter marks the 150th anniversary of Blessed Pope Pius IX’s declaration of St Joseph as Patron of the Universal Church. To celebrate the anniversary, Pope Francis has proclaimed a special “Year of St Joseph,” beginning on the Solemnity of the Immaculate Conception 2020 and extending to the same feast in 2021.

The Holy Father wrote "Patris corde" against the backdrop of the Covid-19 pandemic, which, he says, has helped us see more clearly the importance of “ordinary” people who, though far from the limelight, exercise patience and offer hope every day. In this, they resemble Saint Joseph, “the man who goes unnoticed, a daily, discreet and hidden presence,” who nonetheless played “an incomparable role in the history of salvation.” 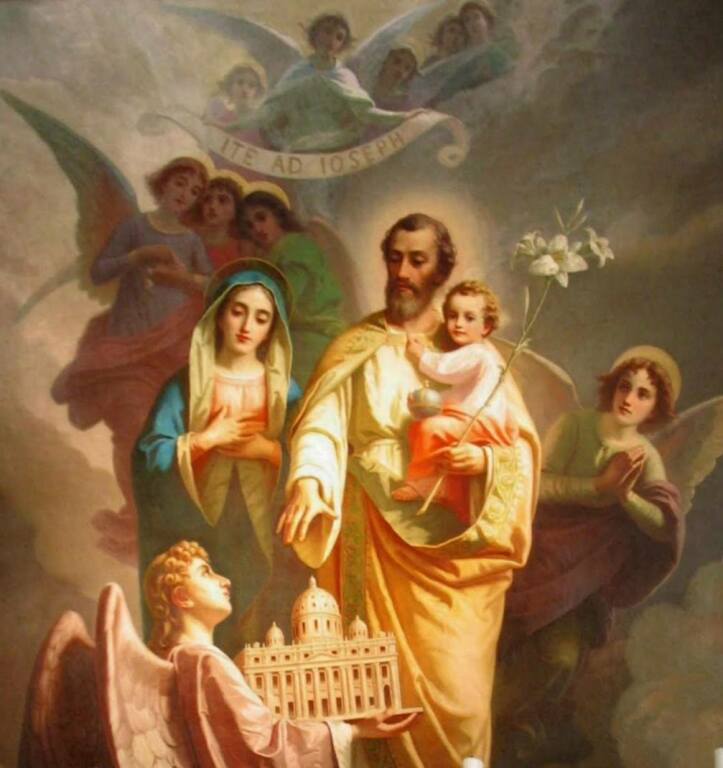 A beloved, tender, obedient father
Saint Joseph, in fact, “concretely expressed his fatherhood” by making an offering of himself in love “a love placed at the service of the Messiah who was growing to maturity in his home,” writes Pope Francis, quoting his predecessor St Paul VI.

And because of his role at “the crossroads between the Old and New Testament,” St Joseph “has always been venerated as a father by the Christian people” (PC, 1). In him, “Jesus saw the tender love of God,” the one that helps us accept our weakness, because “it is through” and despite “our fears, our frailties, and our weakness” that most divine designs are realized. “Only tender love will save us from the snares of the accuser,” emphasizes the Pontiff, and it is by encountering God’s mercy especially in the Sacrament of Reconciliation that we “experience His truth and tenderness,” – because “we know that God’s truth does not condemn us, but instead welcomes, embraces, sustains and forgives us” (PC, 2).

Joseph is also a father in obedience to God: with his ‘fiat’ he protects Mary and Jesus and teaches his Son to “do the will of the Father.” Called by God to serve the mission of Jesus, he “cooperated… in the great mystery of Redemption,” as St John Paul II said, “and is truly a minister of salvation” (PC, 3).

Church grants plenary indulgence for year of St. Joseph
Pope Francis announced a special year dedicated to St. Joseph that already started December 8, 2020 until 8 December 2021, on the occasion of the 150th anniversary of the proclamation of St. Joseph as the Patron of the Universal Church, as well as the Solemnity of the Immaculate Conception of Our Lady.

The Apostolic Penitentiary also issued a decree granting special indulgences for the duration of the special year to celebrate the anniversary and “to perpetuate the entrustment of the whole Church to the powerful patronage of the Custodian of Jesus.”

Devotion to St. Joseph
The decree signed by Cardinal Mauro Piacenza, the Major Penitentiary of the Apostolic Penitentiary, and the Regent, Fr. Krzysztof Nykiel, notes that devotion to St. Joseph has grown extensively throughout the history of the Church, “which not only attributes to him high reverence after that of the Mother of God his spouse but has also given him multiple patronages.”

At the same time, the Magisterium of the Church continues to discover “old and new greatness in this treasure which is St. Joseph, like the master in the Gospel of Matthew who brings from his storeroom both the new and the old.”

Therefore, the gift of indulgences granted through a decree of the Apostolic Penitentiary by mandate of the Holy Father “will be of great benefit to the perfect attainment of the appointed purpose.”

Conditions for the plenary indulgence
The plenary indulgence is granted to the faithful under the usual conditions (sacramental confession, Eucharistic Communion, and prayer for the Pope’s intentions) to Christians who, with a spirit detached from any sin, participate in the Year of St. Joseph on these occasions and manners indicated by the Apostolic Penitentiary:

The plenary indulgence is granted to those who will meditate for at least 30 minutes on the Lord’s Prayer, or take part in a Spiritual Retreat of at least one day that includes a meditation on St. Joseph. “St. Joseph, an authentic man of faith, invites us”, the decree reads, “to rediscover our filial relationship with the Father, to renew fidelity to prayer, to listen and correspond with profound discernment to God’s will.”

The indulgence can also be obtained by those who, following St. Joseph’s example, will perform a spiritual or corporal work of mercy. St. Joseph “encourages us to rediscover the value of silence, prudence and loyalty in carrying out our duties,” the decree notes.

The recitation of the Holy Rosary in families and among engaged couples is another way of obtaining indulgences, in order that “all Christian families may be stimulated to recreate the same atmosphere of intimate communion, love and prayer that was in the Holy Family.”

Everyone who entrusts their daily activity to the protection of St. Joseph, and every faithful who invokes the intercession of St. Joseph so that those seeking work can find dignifying work can also obtain the plenary indulgence. On 1 May 1955, Pope Pius XII instituted the feast of St. Joseph “with the intent that the dignity of work be recognized by all, and that it inspires social life and laws, based on the fair distribution of rights and duties.”

The plenary indulgence is also granted to the faithful who will recite the Litany to St. Joseph (for the Latin tradition), or the Akathistos to St. Joseph (for the Byzantine tradition), or any other prayer to St. Joseph proper to the other liturgical traditions, for the persecuted Church ad intra and ad extra, and for the relief of all Christians suffering all forms of persecution. Because, the decree notes, “the flight of the Holy Family to Egypt shows us that God is there where man is in danger, where man suffers, where he runs away, where he experiences rejection and abandonment.”

A universal saint
In addition to these, the Apostolic Penitentiary grants a plenary indulgence to the faithful who will recite any legitimately approved prayer or act of piety in honor of St. Joseph, for example, “To you, O blessed Joseph” especially on “19 March, on 1 May, the Feast of the Holy Family of Jesus, Mary and Joseph, on St. Joseph’s Sunday (according to the Byzantine tradition) on the 19th of each month and every Wednesday, a day dedicated to the memory of the saint according to the Latin tradition.”

The decree recalls the universality of St. Joseph’s patronage of the Church, noting that St. Teresa of Ávila recognized him as "a protector for all the circumstances of life". Pope St. John Paul II also said that St. Joseph has “a renewed relevance for the Church of our time, in relation to the new Christian millennium.”

For the sick
Amid the ongoing Covid-19 health crisis, the gift of the plenary indulgence is also extended to the sick, the elderly, the dying and all those who for legitimate reasons are unable to leave their homes.

They too can obtain the plenary indulgences if they are detached from any sin and have the intention of fulfilling, as soon as possible, the three usual conditions and recite an act of piety in honor of St. Joseph, offering to God the pains and hardships of their lives.

The role of priests
The Apostolic Penitentiary encourages priests to pastorally facilitate the celebration of the Sacrament of Penance and the administration of Holy Communion to the sick with a willing and generous spirit.

I hope that the article above may move you to join us for a public mass at 7:30 a.m. here in our church of St. Peter Claver on Friday, March 19, which is the Feast Day of St. Joseph!